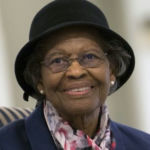 American mathematician known for her contributions to Global Positioning Systems

Why Is Gladys West Influential?

According to Wikipedia, Gladys Mae West is an American mathematician known for her contributions to the mathematical modeling of the shape of the Earth, and her work on the development of the satellite geodesy models that were eventually incorporated into the Global Positioning System . West was inducted into the United States Air Force Hall of Fame in 2018. West was awarded the Webby Lifetime Achievement Award at 25th Annual Webby Awards for the development of the satellite geodesy models.

Other Resources About Gladys West

What Schools Are Affiliated With Gladys West?

Gladys West is affiliated with the following schools: