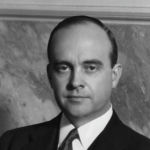 Journalist and president of University of Wisconsin–Madison

Why Is Glenn Frank Influential?

According to Wikipedia, Glenn Frank was a president of the University of Wisconsin–Madison and The Century Magazines editor-in-chief. He graduated from Northwestern University in 1912 and became Edward Filene's personal assistant, where he wrote two books on the side. He joined The Century Magazine as an associate editor and became its editor-in-chief in three years, which gave his views on education a wide audience. He was tapped to the University of Wisconsin's presidency in 1925, where he introduced the Experimental College before being ousted in 1937. Frank became involved in Wisconsin politics and ran for the state's United States Senate seat, but died with his son in a car accident two days before the Republican Party primary.

Other Resources About Glenn Frank

What Schools Are Affiliated With Glenn Frank?

Glenn Frank is affiliated with the following schools: