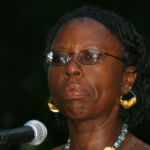 Why Is Gloria Naylor Influential?

According to Wikipedia, Gloria Naylor was an American novelist, known for novels including The Women of Brewster Place , Linden Hills and Mama Day . Early life and education Naylor was born in New York on January 25, 1950, the oldest child of Roosevelt Naylor and Alberta McAlpin. The Naylors, who had been sharecroppers in Robinsonville, Mississippi, had migrated to Harlem to escape life in the segregated South and seek new opportunities in New York City. Her father became a transit worker; her mother, a telephone operator. Even though Naylor's mother had little education, she loved to read, and encouraged her daughter to read and keep a journal. Before her teen years, Gloria began writing prodigiously, filling many notebooks with observations, poems, and short stories.

Other Resources About Gloria Naylor

What Schools Are Affiliated With Gloria Naylor?

Gloria Naylor is affiliated with the following schools:

What Are Gloria Naylor's Academic Contributions?

Gloria Naylor has made the following academic contributions: