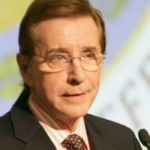 Why Is Gordon S. Heddell Influential?

According to Wikipedia, Gordon S. Heddell is a former Inspector General of the United States Department of Defense. Previously, Heddell also served as Inspector General for the Department of Labor. Early government experience Heddell began his government service as a U.S. Army chief warrant officer and helicopter pilot, serving in both South Korea and Taiwan during the Vietnam War. After leaving the military, he served as a special agent in the United States Secret Service for 28 years. While with the Secret Service, Heddell served as special agent-in-charge of the Vice Presidential Protective Division, leading and managing the physical protection of the Vice President of the United States. He eventually rose to the position of assistant director for inspections, serving as a key advisor to the director, providing advice and counsel on all facets of Secret Service leadership and operations.

Other Resources About Gordon S. Heddell

What Schools Are Affiliated With Gordon S. Heddell?

Gordon S. Heddell is affiliated with the following schools: