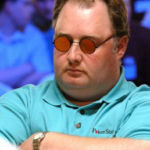 Why Is Greg Raymer Influential?

According to Wikipedia, Gregory Raymer, nicknamed "Fossilman," is a professional poker player and author. He is best known for winning the 2004 World Series of Poker Main Event. Early life Raymer's family moved numerous times during his childhood, from his birthplace of Minot, North Dakota to Lansing, Michigan, where he lived until age 10. He then moved to Clearwater, Florida, attending Dunedin Middle School, and would move later once again, this time to St. Louis, Missouri.

Other Resources About Greg Raymer

What Schools Are Affiliated With Greg Raymer?

Greg Raymer is affiliated with the following schools: