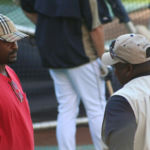 Why Is Greg Vaughn Influential?

According to Wikipedia, Gregory Lamont Vaughn is an American former baseball left fielder who played for the Milwaukee Brewers , San Diego Padres , Cincinnati Reds , Tampa Bay Devil Rays and Colorado Rockies of Major League Baseball . He was born in Sacramento, California, where he attended Kennedy High School. He then played baseball at the University of Miami. He is the cousin of fellow former major leaguers Mo Vaughn and Jerry Royster.

Other Resources About Greg Vaughn

What Schools Are Affiliated With Greg Vaughn?

Greg Vaughn is affiliated with the following schools: