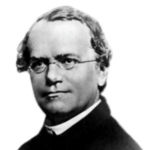 Why Is Gregor Mendel Influential?

According to Wikipedia, Gregor Johann Mendel was a meteorologist, mathematician, biologist, Augustinian friar and abbot of St. Thomas' Abbey in Brno, Margraviate of Moravia. Mendel was born in a German-speaking family in the Silesian part of the Austrian Empire and gained posthumous recognition as the founder of the modern science of genetics. Though farmers had known for millennia that crossbreeding of animals and plants could favor certain desirable traits, Mendel's pea plant experiments conducted between 1856 and 1863 established many of the rules of heredity, now referred to as the laws of Mendelian inheritance.

Other Resources About Gregor Mendel

What Schools Are Affiliated With Gregor Mendel?

Gregor Mendel is affiliated with the following schools: