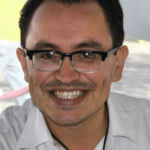 Why Is Gustavo Arellano Influential?

According to Wikipedia, Gustavo Arellano is an American writer and journalist. He is a featured contributor for the Los Angeles Times and the former publisher and editor of Orange County's alternative weekly OC Weekly. He is most notable as the author of the column ¡Ask a Mexican!, which is syndicated nationally and has been collected into book form as ¡Ask a Mexican! . Arellano has won numerous awards for the column, including the 2006 and 2008 Best Non-Political Column in a large-circulation weekly from the Association of Alternative Newsweeklies, the 2007 Presidents Award from the Los Angeles Press Club and an Impacto Award from the National Hispanic Media Coalition, and a 2008 Latino Spirit award from the California Latino Legislative Caucus.

Other Resources About Gustavo Arellano

What Schools Are Affiliated With Gustavo Arellano?

Gustavo Arellano is affiliated with the following schools: