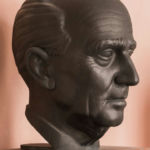 Why Is Hans Kelsen Influential?

According to Wikipedia, Hans Kelsen was an Austrian jurist, legal philosopher and political philosopher. He was the author of the 1920 Austrian Constitution, which to a very large degree is still valid today. Due to the rise of totalitarianism in Austria , Kelsen left for Germany in 1930 but was forced to leave this university post after Hitler's seizure of power in 1933 because of his Jewish ancestry. That year he left for Geneva and later moved to the United States in 1940. In 1934, Roscoe Pound lauded Kelsen as "undoubtedly the leading jurist of the time". While in Vienna, Kelsen met Sigmund Freud and his circle, and wrote on the subject of social psychology and sociology.

Other Resources About Hans Kelsen

What Schools Are Affiliated With Hans Kelsen?

Hans Kelsen is affiliated with the following schools:

What Are Hans Kelsen's Academic Contributions?

Hans Kelsen has made the following academic contributions: