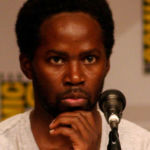 Why Is Harold Perrineau Influential?

According to Wikipedia, Harold Perrineau is an American actor best known for his roles as Michael Dawson in the ABC television series Lost , Augustus Hill in the HBO television series Oz , Sheriff Boyd Stevens in the Epix television From , Link in The Matrix Reloaded and The Matrix Revolutions , and Mercutio in Baz Luhrmann's Romeo + Juliet . He has also starred in the films Smoke , for which was nominated for the Independent Spirit Award for Best Supporting Male, The Edge , The Best Man , Woman on Top , and 28 Weeks Later . His other television credits include Sons of Anarchy , Constantine , Claws , and The Rookie .

Other Resources About Harold Perrineau

What Schools Are Affiliated With Harold Perrineau?

Harold Perrineau is affiliated with the following schools: