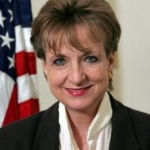 Why Is Harriet Miers Influential?

According to Wikipedia, Harriet Ellan Miers is an American lawyer who served as White House Counsel to President George W. Bush from 2005 to 2007. A member of the Republican Party since 1988, she previously served as White House Staff Secretary from 2001 to 2003 and White House Deputy Chief of Staff for Policy from 2003 until 2005. In 2005, Miers was nominated by Bush to be an associate justice of the Supreme Court of the United States to replace retiring Justice Sandra Day O'Connor, but—in the face of bipartisan opposition—asked Bush to withdraw her nomination. Following her withdrawal in 2007, Miers returned to private practice, becoming a partner in the litigation and public policy group at Locke Lord.

Other Resources About Harriet Miers

What Schools Are Affiliated With Harriet Miers?

Harriet Miers is affiliated with the following schools: