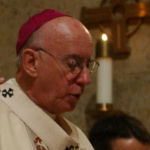 Why Is Harry Joseph Flynn Influential?

According to Wikipedia, Harry Joseph Flynn was a prelate of the Roman Catholic Church in the United States and Archbishop Emeritus of the Archdiocese of Saint Paul and Minneapolis, where he served from September 8, 1995 to May 2, 2008, when his resignation was accepted by Pope Benedict XVI. Previously, Archbishop Flynn was the fourth Bishop of the Diocese of Lafayette in south-central Louisiana.

Other Resources About Harry Joseph Flynn

What Schools Are Affiliated With Harry Joseph Flynn?

Harry Joseph Flynn is affiliated with the following schools: