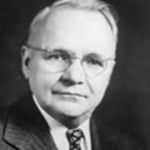 Why Is Harry Nyquist Influential?

According to Wikipedia, Harry Nyquist was a Swedish physicist and electronic engineer who made important contributions to communication theory. Personal life Nyquist was born in the village Nilsby of the parish Stora Kil, Värmland, Sweden. He was the son of Lars Jonsson Nyqvist and Katrina Eriksdotter . His parents had eight children: Elin Teresia, Astrid, Selma, Harry Theodor, Amelie, Olga Maria, Axel Martin and Herta Alfrida. He emigrated to the USA in 1907.

Other Resources About Harry Nyquist

What Schools Are Affiliated With Harry Nyquist?

Harry Nyquist is affiliated with the following schools: