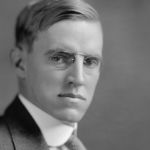 Why Is Harry A. Slattery Influential?

According to Wikipedia, Harry A. Slattery , was an American lawyer and statesman. He was United States Under Secretary of the Interior from 1938–39 and gave his name to the Slattery Report, which proposed to develop Alaska through immigration. The proposal, which included the settlement of Jewish refugees from Germany and Austria, largely in response to Nazi antisemitism, was never implemented.

Other Resources About Harry A. Slattery

What Schools Are Affiliated With Harry A. Slattery?

Harry A. Slattery is affiliated with the following schools: