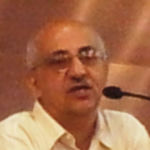 Why Is Harsh Mander Influential?

According to Wikipedia, Harsh Mander is an Indian author, columnist, researcher, teacher, and social activist who started the Karwan-e-Mohabbat campaign in solidarity with the victims of communal or religiously motivated violence. He is the Director of the Centre for Equity Studies, a research organisation based in New Delhi. He also served as Special Commissioner to the Supreme Court of India in the Right to Food Campaign and was a member of the National Advisory Council of the Government of India, set up under the UPA government. He has occasionally come under media attention for his liberal views.

Other Resources About Harsh Mander