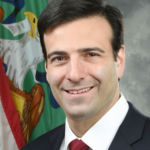 Why Is Heath Tarbert Influential?

According to Wikipedia, Heath Price Tarbert is an American lawyer and former government official who most recently served as the 14th Chairman and a Commissioner of the Commodity Futures Trading Commission . Prior to leading the CFTC, he served as Assistant Secretary of the Treasury for International Markets and Development and as acting Under Secretary of the Treasury for International Affairs. As of April 6, 2021, he is the Chief Legal Officer of Citadel Securities.

Other Resources About Heath Tarbert

What Schools Are Affiliated With Heath Tarbert?

Heath Tarbert is affiliated with the following schools: