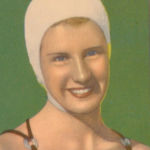 Why Is Helen Crlenkovich Influential?

According to Wikipedia, Helen Crlenkovich was one of the most successful athletes in America and the world on the three-meter springboard and the ten-meter platform. She was a Croatian American known to friends and family as "Klinky." Both of her parents are from Croatia: mother Anka Tomin is from Petrijevci, and father Adam from Banićevac near Cernik.

Other Resources About Helen Crlenkovich

What Schools Are Affiliated With Helen Crlenkovich?

Helen Crlenkovich is affiliated with the following schools: