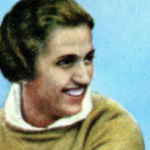 Why Is Helen Stephens Influential?

According to Wikipedia, Helen Herring Stephens was an American athlete and a double Olympic champion in 1936. Biography Stephens, nicknamed the "Fulton Flash" after her birthplace, Fulton, Missouri, was a strong athlete in sprint events—she never lost a race in her entire career—and also in weight events such as the shot put and discus throw. She won national titles in both categories.

Other Resources About Helen Stephens

What Schools Are Affiliated With Helen Stephens?

Helen Stephens is affiliated with the following schools: