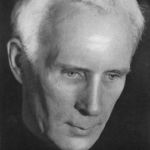 Why Is Henri de Lubac Influential?

According to Wikipedia, Henri-Marie Joseph Sonier de Lubac , better known as Henri de Lubac, was a French Jesuit priest and cardinal who is considered one of the most influential theologians of the 20th century. His writings and doctrinal research played a key role in shaping the Second Vatican Council.

Other Resources About Henri de Lubac

Henri de Lubac has made the following academic contributions: