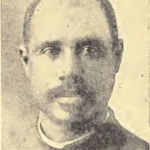 The first Black Bishop of the Episcopal Church in the United States.

Why Is Henry Beard Delany Influential?

According to Wikipedia, Henry Beard Delany was an American clergyman and the first Black person elected Bishop Suffragan of the Episcopal Church in the United States. Early life Henry Delany was born into slavery in St. Mary's, Georgia, in 1858. His parents were Thomas Delany, a ship and house carpenter, and Sarah, a house servant to a Methodist family in that town. After the American Civil War and emancipation, the family moved to Fernandina Beach, Florida, where young Delany learned brick laying, plastery and carpentry from his father, and also helped on the family farm. He was able to attend a school funded by the Freedmen's Bureau and staffed by missionaries. In 1881 the rector of St. Peter's Episcopal Church in that town, Rev. Owen Thackera, funded a scholarship to allow Delany to attend St. Augustine's College in Raleigh, North Carolina, which Episcopal priests had founded in 1867 to educate newly freed men and women. There, Delany studied theology, music and other subjects.

Other Resources About Henry Beard Delany

What Schools Are Affiliated With Henry Beard Delany?

Henry Beard Delany is affiliated with the following schools: