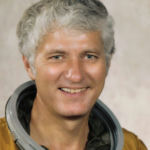 Why Is Henry Hartsfield Influential?

According to Wikipedia, Henry Warren Hartsfield Jr. was a United States Air Force Colonel and NASA astronaut who logged over 480 hours in space. He was inducted into the United States Astronaut Hall of Fame in 2006. Personal data Henry Hartsfield was born in Birmingham, Alabama on 21 November 1933. He was married to the former Judy Frances Massey of Princeton, North Carolina, and has a daughter named Judy Lynn, born 29 May 1958. His younger daughter, Keely Warren, born on 14 May 1959, died on 10 March 2014.

Other Resources About Henry Hartsfield

What Schools Are Affiliated With Henry Hartsfield?

Henry Hartsfield is affiliated with the following schools: