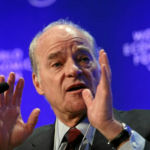 Why Is Henry Kravis Influential?

According to Wikipedia, Henry R. Kravis is an American businessman, investor, and philanthropist. He is the co-founder of KKR & Co. Inc. Kravis is a Republican who has supported a variety of causes and made significant donations to both parties, including a contribution of $1 million to Donald Trump's presidential inauguration. His lavish lifestyle has been criticized by activists looking to reform private equity regulations and restrict the practice of leveraged buyouts he pioneered. His buyout of RJR Nabisco was portrayed in the 1989 book and 1993 film Barbarians at the Gate.

Other Resources About Henry Kravis

What Schools Are Affiliated With Henry Kravis?

Henry Kravis is affiliated with the following schools: