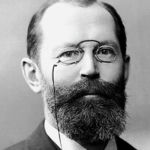 Why Is Emil Fischer Influential?

According to Wikipedia, Hermann Emil Louis Fischer FRS FRSE FCS was a German chemist and 1902 recipient of the Nobel Prize in Chemistry. He discovered the Fischer esterification. He also developed the Fischer projection, a symbolic way of drawing asymmetric carbon atoms. He also hypothesized lock and key mechanism of enzyme action. He never used his first given name, and was known throughout his life simply as Emil Fischer.

Other Resources About Emil Fischer

What Schools Are Affiliated With Emil Fischer?

Emil Fischer is affiliated with the following schools: