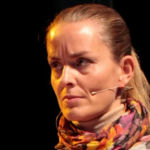 Why Is Hilde Sandvik Influential?

According to Wikipedia, Hilde Sandvik is a Norwegian journalist. She was born in Erfjord and has a cand.philol. degree from the University of Bergen, majoring in art history. She edited the periodical Syn og Segn from 2003 to 2006, was briefly debate editor in Dagbladet in 2005, and later journalist and debate editor in Bergens Tidende from 2006 to 2016. She has also released several books.

Other Resources About Hilde Sandvik

What Schools Are Affiliated With Hilde Sandvik?

Hilde Sandvik is affiliated with the following schools: