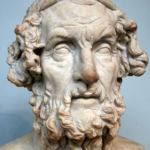 Reputed author of the Iliad and the Odyssey

Why Is Homer Influential?

According to Wikipedia, Homer is the legendary author to whom the authorship of the Iliad and the Odyssey is attributed. He is regarded as one of the greatest and most influential authors of all time. In Dante Alighieri's Divine Comedy, Virgil refers to him as "Poet sovereign", king of all poets; in the preface to his translation of the Iliad, Alexander Pope acknowledges that Homer has always been considered the "greatest of poets".

Other Resources About Homer

What Are Homer's Academic Contributions?

Homer has made the following academic contributions: