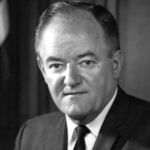 Why Is Hubert Humphrey Influential?

According to Wikipedia, Hubert Horatio Humphrey Jr. was an American pharmacist and politician who served as the 38th vice president of the United States from 1965 to 1969. He twice served in the United States Senate, representing Minnesota from 1949 to 1964 and 1971 to 1978. As a senator he was a major leader of modern liberalism in the United States. As President Lyndon Johnson's vice president, he supported the controversial Vietnam War. An intensely divided Democratic Party nominated him in the 1968 presidential election, which he lost to Republican nominee Richard Nixon.

Other Resources About Hubert Humphrey

What Schools Are Affiliated With Hubert Humphrey?

Hubert Humphrey is affiliated with the following schools: