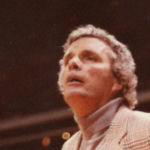 Why Is Hubie Brown Influential?

According to Wikipedia, Hubert Jude Brown is an American retired basketball coach and player and a current television analyst. Brown is a two-time NBA Coach of the Year, the honors being separated by 26 years. Brown was inducted into the Naismith Memorial Basketball Hall of Fame in 2005.

Other Resources About Hubie Brown

What Schools Are Affiliated With Hubie Brown?

Hubie Brown is affiliated with the following schools: