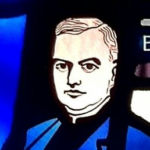 Why Is Hugh Charles Boyle Influential?

According to Wikipedia, Hugh Charles Boyle was an American prelate of the Roman Catholic Church. He served as Bishop of Pittsburgh from 1921 until his death in 1950. Biography Hugh Boyle was born in Johnstown, Pennsylvania, one of nine children of Charles and Anna Boyle. His father was an Irish immigrant who worked as a coal miner. He received his early education at local parochial schools, and enrolled at St. Vincent College in Latrobe at age 14. During the 1889 Johnstown Flood, his father and most of his siblings drowned; only his mother and one brother survived. He began his studies for the priesthood at St. Vincent Seminary, also in Latrobe, in 1891.

Other Resources About Hugh Charles Boyle

What Schools Are Affiliated With Hugh Charles Boyle?

Hugh Charles Boyle is affiliated with the following schools: