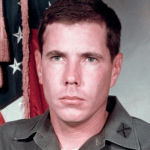 Why Is Hugh Thompson Jr. Influential?

According to Wikipedia, Hugh Clowers Thompson Jr. was a United States Army Major, and a former warrant officer in the 123rd Aviation Battalion of the 23rd Infantry Division. He is credited with ending the Mỹ Lai Massacre of the South Vietnamese village known as Sơn Mỹ on March 16, 1968, alongside and hierarchically above Glenn Andreotta and Lawrence Colburn.

Other Resources About Hugh Thompson Jr.

What Schools Are Affiliated With Hugh Thompson Jr.?

Hugh Thompson Jr. is affiliated with the following schools: