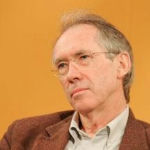 Why Is Ian McEwan Influential?

According to Wikipedia, Ian Russell McEwan, is an English novelist and screenwriter. In 2008, The Times featured him on its list of "The 50 greatest British writers since 1945" and The Daily Telegraph ranked him number 19 in its list of the "100 most powerful people in British culture".

Other Resources About Ian McEwan

What Schools Are Affiliated With Ian McEwan?

Ian McEwan is affiliated with the following schools:

What Are Ian McEwan's Academic Contributions?

Ian McEwan has made the following academic contributions: