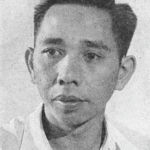 Why Is Idrus Influential?

According to Wikipedia, Idrus was an Indonesian author best known for his realistic short stories and novels. He is known as the representative of the prose of the '45 generation of Indonesian literature. Biography Idrus was born in Padang, West Sumatera on 12 September 1921. His education before the Japanese occupation of Indonesia in 1942 was entirely in Dutch-run schools, where he read works of Western literature and practiced writing short stories; he finished his education in 1943, then began working at Balai Pustaka – the state-owned publisher of the Dutch East Indies – as an editor. Between 1943 and 1944, Idrus wrote six short stories that were eventually published in the collection Corat-Coret di Bawah Tanah .

Other Resources About Idrus

What Schools Are Affiliated With Idrus?

Idrus is affiliated with the following schools: