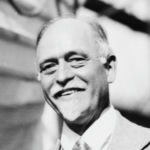 Why Is Irving Fisher Influential?

According to Wikipedia, Irving Fisher was an American economist, statistician, inventor, eugenicist and progressive social campaigner. He was one of the earliest American neoclassical economists, though his later work on debt deflation has been embraced by the post-Keynesian school. Joseph Schumpeter described him as "the greatest economist the United States has ever produced", an assessment later repeated by James Tobin and Milton Friedman.

Other Resources About Irving Fisher

What Schools Are Affiliated With Irving Fisher?

Irving Fisher is affiliated with the following schools: