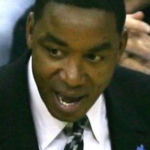 Why Is Isiah Thomas Influential?

According to Wikipedia, Isiah Lord Thomas III is an American former professional basketball player, coach and executive who is an analyst for NBA TV. The 12-time NBA All-Star was named one of the 50 Greatest Players in NBA History as well as the 75 Greatest Players, and inducted into the Naismith Memorial Basketball Hall of Fame. He played his entire professional career for the Detroit Pistons of the National Basketball Association .

Other Resources About Isiah Thomas

What Schools Are Affiliated With Isiah Thomas?

Isiah Thomas is affiliated with the following schools: