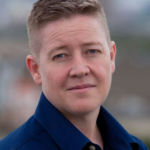 Why Is Ivan Coyote Influential?

According to Wikipedia, Ivan E. Coyote is a Canadian spoken word performer, writer, and LGBT advocate. Coyote has won many accolades for their collections of short stories, novels, and films. They also visit schools to tell stories and give writing workshops. The CBC has called Coyote a "gender-bending author who loves telling stories and performing in front of a live audience." Coyote is non-binary and uses singular they pronouns. Many of Coyote's stories are about gender, identity, and social justice. Coyote currently resides in Vancouver, BC.

Other Resources About Ivan Coyote

What Schools Are Affiliated With Ivan Coyote?

Ivan Coyote is affiliated with the following schools: