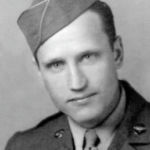 Awarded both the Distinguished Flying Cross and the Purple Heart

Why Is Jacob DeShazer Influential?

According to Wikipedia, Jacob Daniel DeShazer participated in the Doolittle Raid as a staff sergeant and later became a Christian missionary in Japan. Early years DeShazer was born on 15 November 1912 in West Stayton, Oregon and graduated from Madras High School in Madras, Oregon in 1931. On Sunday 7 December 1941, while peeling potatoes, DeShazer heard news of the attack on Pearl Harbor over the radio. He became enraged, shouting: "Japan is going to have to pay for this!" He also was an atheist.

Other Resources About Jacob DeShazer

What Schools Are Affiliated With Jacob DeShazer?

Jacob DeShazer is affiliated with the following schools: