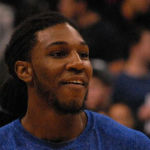 Why Is Jae Crowder Influential?

According to Wikipedia, Corey Jae Crowder is an American professional basketball player for the Phoenix Suns of the National Basketball Association . Not being heavily recruited out of high school, Crowder committed to South Georgia Technical College and later Howard College, where he led the team to an NJCAA Men's Division I Basketball Championship in his sophomore season. While at Howard College, Crowder was also named State Farm Junior College Player of the Year. Later, he transferred to Marquette, where he was named Big East Player of the Year in his senior season. After his senior year ended, he became eligible for the 2012 NBA draft, where he was drafted 34th overall by the Cleveland Cavaliers and traded to the Dallas Mavericks on draft night. In 2014, Crowder was traded to the Boston Celtics. He spent three years in Boston before being traded back to his draft team, the Cavaliers, in August 2017. In 2018, he was traded to the Utah Jazz and he has also played for the Memphis Grizzlies and the Miami Heat . He reached his second NBA Finals with the Phoenix Suns in 2021.

Other Resources About Jae Crowder

What Schools Are Affiliated With Jae Crowder?

Jae Crowder is affiliated with the following schools: