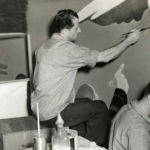 Why Is James Brooks Influential?

According to Wikipedia, James David Brooks was an American Abstract Expressionist, muralist, abstract painter, and winner of the Logan Medal of the Arts. Life and career Brooks was born in St. Louis, Missouri and attended Southern Methodist University and the Dallas Art Institute and moved to New York in 1926 where he attended night classes at the Art Students League.

Other Resources About James Brooks

What Schools Are Affiliated With James Brooks ?

James Brooks is affiliated with the following schools: