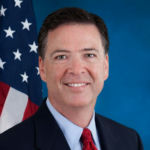 Why Is James Comey Influential?

According to Wikipedia, James Brien Comey Jr. is an American lawyer who was the 7th director of the Federal Bureau of Investigation from 2013 until his dismissal in May 2017. Comey was a registered Republican for most of his adult life; however, in 2016, he described himself as unaffiliated.

Other Resources About James Comey

What Schools Are Affiliated With James Comey?

James Comey is affiliated with the following schools:

What Are James Comey's Academic Contributions?

James Comey has made the following academic contributions: