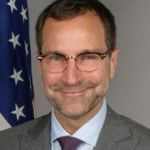 Why Is James Costos Influential?

According to Wikipedia, James Costos was the United States Ambassador to Spain and Andorra from 2013 to 2017. He was appointed by President Barack Obama and confirmed by the United States Senate on August 1, 2013. Early life and education Costos was born in 1963 and grew up in Lowell, Massachusetts. He is a second-generation Greek-American, whose father served as a U.S. Marine and was stationed at Camp David during the Truman administration. He is the first in his family to graduate college. He earned a degree in political science from the University of Massachusetts Lowell in 1985.

Other Resources About James Costos

What Schools Are Affiliated With James Costos?

James Costos is affiliated with the following schools: