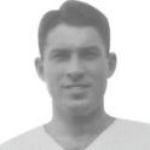 Why Is James Gentle Influential?

According to Wikipedia, James Cuthbert Gentle was an American soccer striker, field hockey player, soldier, and golfer. He is a member of the National Soccer Hall of Fame. Youth Born outside Boston in Brookline, Massachusetts, Gentle grew up in his hometown, attended Brookline High School. In 1922, he entered the University of Pennsylvania where he played football as a freshman. He switched to soccer and track for his next three years at Penn, earning first team All American honors for soccer in 1924 and 1925. Gentle graduated from the university's Wharton School with a bachelor's degree in economics in 1926. Active in student government, Gentle was his class president and a member of the Mask and Wig and Varsity Club.

Other Resources About James Gentle

What Schools Are Affiliated With James Gentle?

James Gentle is affiliated with the following schools: