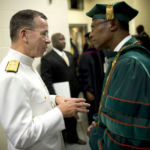 Why Is James H. Ammons Influential?

According to Wikipedia, Dr. James H. Ammons was the president of Florida A&M University . He served from July 2, 2007, until his resignation took effect on July 16, 2012. He is a native Floridian who grew up in the heart of Florida's citrus belt. He graduated from Winter Haven High School in 1970 and entered Florida A&M University on the Thirteen College Curriculum Program during the fall semester of 1970. Dr. Ammons was appointed Chancellor at Southern University at New Orleans January 8th 2021.

Other Resources About James H. Ammons

What Schools Are Affiliated With James H. Ammons?

James H. Ammons is affiliated with the following schools: