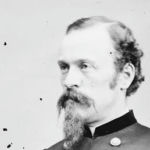 Why Is James H. Wilson Influential?

According to Wikipedia, James Harrison Wilson was a United States Army topographic engineer and a Union Army Major General in the American Civil War. He served as an aide to Maj. Gen. George B. McClellan during the Maryland Campaign before joining Maj. Gen. Ulysses S. Grant's army in the Western Theater, where he was promoted to brigadier general. In 1864, he transferred from engineering to the cavalry, where he displayed notable leadership in many engagements of the Overland Campaign, though his attempt to destroy Lee’s supply lines failed when he was routed by a much smaller force of Confederate irregulars.

Other Resources About James H. Wilson

What Schools Are Affiliated With James H. Wilson?

James H. Wilson is affiliated with the following schools: