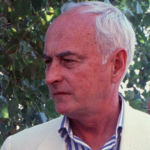 Why Is James Ivory Influential?

According to Wikipedia, James Francis Ivory is an American film director, producer, and screenwriter. For many years, he worked extensively with Indian-born film producer Ismail Merchant, his domestic as well as professional partner, and with screenwriter Ruth Prawer Jhabvala. All three were principals in Merchant Ivory Productions, whose films have won seven Academy Awards; Ivory himself has been nominated for four Oscars, winning one.

Other Resources About James Ivory

What Schools Are Affiliated With James Ivory?

James Ivory is affiliated with the following schools: