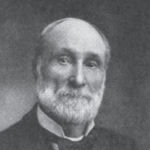 Why Is James Kennedy Patterson Influential?

According to Wikipedia, James Kennedy Patterson was an academic who served as the first president of the University of Kentucky. His family immigrated from Scotland to Indiana in 1842 when he was nine years old. He pursued what meager educational opportunities were available in his new home, and eventually attended Hanover College, where he earned a Bachelor of Arts degree in 1856 and a Master of Arts degree in 1859. He briefly taught at Stewart College in Clarksville, Tennessee, but left the area when the Civil War forced the college to suspend operations. He became the principal at Transylvania Academy in Lexington, Kentucky in 1861. When Transylvania was merged with Kentucky University and the newly formed Kentucky Agricultural and Mechanical College in 1865, Patterson became a professor at the new institution, and was eventually given charge of the constituent Agricultural and Mechanical College.

Other Resources About James Kennedy Patterson

What Schools Are Affiliated With James Kennedy Patterson?

James Kennedy Patterson is affiliated with the following schools: