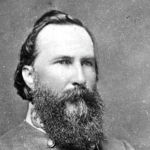 Why Is James Longstreet Influential?

According to Wikipedia, James Longstreet was one of the foremost Confederate generals of the American Civil War and the principal subordinate to General Robert E. Lee, who called him his "Old War Horse". He served under Lee as a corps commander for most of the battles fought by the Army of Northern Virginia in the Eastern Theater, and briefly with Braxton Bragg in the Army of Tennessee in the Western Theater.

Other Resources About James Longstreet

What Schools Are Affiliated With James Longstreet?

James Longstreet is affiliated with the following schools: