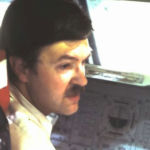 Why Is James Oberg Influential?

According to Wikipedia, James Edward Oberg is an American space journalist and historian, regarded as an expert on the Russian and Chinese space programs. He had a 22-year career as a space engineer in NASA specializing in orbital rendezvous. Oberg is an author of ten books and more than a thousand articles on space flight. He gave many explanations of UFO phenomena in the popular press. He is also a consultant in spaceflight operations and safety.

Other Resources About James Oberg

What Schools Are Affiliated With James Oberg?

James Oberg is affiliated with the following schools: