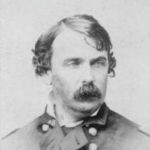 U.S. Representative from Kentucky and a brigadier general in the Union Army

Why Is James S. Jackson Influential?

According to Wikipedia, James Streshly Jackson was a U.S. Representative from Kentucky and a brigadier general in the Union Army during the American Civil War. Biography Born in Fayette County, Kentucky, Jackson pursued classical studies at Centre College, Danville, Kentucky. He graduated from Jefferson College, Canonsburg, Pennsylvania, in 1844, and the following year from the law department of Transylvania University, Lexington, Kentucky. He was admitted to the bar and began practicing law in Greenupsburg, Kentucky.

Other Resources About James S. Jackson

What Schools Are Affiliated With James S. Jackson?

James S. Jackson is affiliated with the following schools: