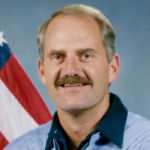 Why Is James van Hoften Influential?

According to Wikipedia, James Dougal Adrianus "Ox" van Hoften is an American civil and hydraulic engineer, retired U.S. Navy officer and aviator, and a former astronaut for NASA. Personal data Van Hoften was born June 11, 1944, in Fresno, California. He was active in the Boy Scouts of America where he achieved its second-highest rank, Life Scout. He considers Burlingame, California, to be his hometown. He is of Dutch descent. Van Hoften is married to the former Vallarie Davis of Pasadena, with three children: Jennifer Lyn , Jamie Juliana , and Victoria Jane . He enjoys skiing, playing handball and racquetball, and jogging. In college, he was a member of the Alpha Sigma chapter of Pi Kappa Alpha.

Other Resources About James van Hoften

What Schools Are Affiliated With James van Hoften?

James van Hoften is affiliated with the following schools: