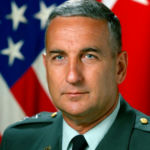 Why Is James W. Crysel Influential?

According to Wikipedia, James W. Crysel is a retired United States Army officer who attained the rank of lieutenant general. He was notable for his command of Second United States Army and the 25th Infantry Division. Early life James Wendell Crysel was born in Luverne, Alabama on May 18, 1937. He graduated from Stetson University in 1959 with a Bachelor of Science degree in business management. He completed the Reserve Officers' Training Corps program at Stetson, and was commissioned as a second lieutenant of Infantry. While at Stetson, Crysel also became a member of the Sigma Nu fraternity.

Other Resources About James W. Crysel

What Schools Are Affiliated With James W. Crysel?

James W. Crysel is affiliated with the following schools: