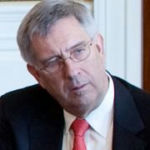 Why Is James W. Owens Influential?

According to Wikipedia, James W. Owens is an American economist and manufacturing executive. He is the former chairman and chief executive officer of Caterpillar Inc., the world's largest manufacturer of construction and mining equipment, diesel and natural gas engines and industrial gas turbines. He held the positions from 1 February 2004 through 2010.

Other Resources About James W. Owens

What Schools Are Affiliated With James W. Owens?

James W. Owens is affiliated with the following schools: